How edge will impact cloud gaming

How edge will impact cloud gaming

The number of people who played digital and/or online video games boomed in 2020. And also for 2021, it is expected that about 870.6 million people across the world will be consistently playing online PC games (including gamers playing on Mac/OS X and Linux systems) for at least one hour a week on average, according to IDC Worldwide Digital PC and Mac Gaming Forecast. No wonder the worldwide spending on cloud gaming services is expected to rise to nearly 36.9 billion dollars in the course of this year. It’s a huge market where most of the revenues is coming from banners, video ads, and investment and sponsorships generated by the ever-growing number of eSports fan.

As we see the gaming market expanding with new games and offerings, the related technological and infrastructural requirements are also growing: more sophisticated video game visuals require more powerful GPUs, high-quality monitors, excellent routers, and low latency connections (that means a very small time delay between the user’s action and the web application response). Of course, these needs may vary depending on what kind of game you’re playing and what the associated reaction time is: fighting games or first-person shooters require a very small latency compared to a chess match, a puzzle or strategy game. However, some of the most popular video game titles nowadays involve racing or fighting that require a very short reaction time and consequently a high speed of connection. And these requirements are needed by a large number of users, including hobbyists and casual gamers.

Therefore, for improved experiences with cloud gaming, there is a constant push to reduce the delays introduced both by local devices and by the network infrastructure. As illustrated in the graphic prepared by Fragkiskos Sardis from Konica Minolta Digital Services R&D for one of his recent talks, the process of cloud gaming involves different infrastructural segments. Let’s investigate the typical cloud gaming datapath by following one signal. 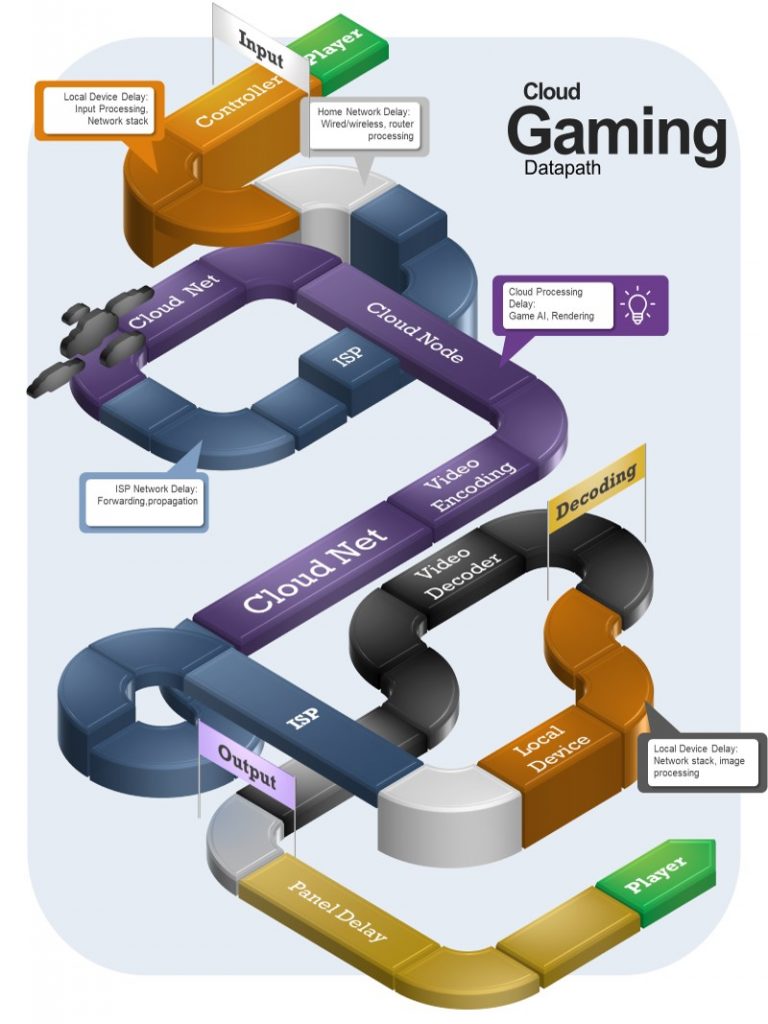 When a gamer pushes a button, the associated signal or data package passes through the following steps:

As you may imagine, even if all these delays are quite small, the whole process can sum up to hundreds of milliseconds, which is an amount of time that can make a huge difference when you’re playing a game requiring a short reaction time.

A CASE FOR THE EDGE

That’s why, in a case like this, edge computing may represent a solution to reduce the latency of the signal. In fact, rather than reaching a far away datacentre, with the edge, the gaming processes could be brought to a location closer to the gamer. Edge computing for cloud gaming would be able to:

In order to achieve a service based on edge computing for cloud gaming, there is the need to have different stakeholders collaborating together to develop a full ecosystem supporting this process.

WHAT IS KONICA MINOLTA DOING WITH EDGE?

Cloud gaming represents a context in which, as shown by the path of the signal through the cloud network, every millisecond counts. However, there are several circumstances in which reducing the latency of signals is of utmost importance for the success of the application. At Konica Minolta Digital Services R&D, in the last year, we’ve been working on Distributed Cloud Intelligence (DCI), a platform as a service (PAAS) solution that locates data analysis and the development of solutions in the place where the data is generated. In this way, the intelligent edge reduces latency, costs and security risks, thus making the organization associated with it more efficient.

With so many edge use cases identified, DCI represents a possible answer to the fast-growing need to exploit the increasing number of connected devices. With huge amounts of data being produced by medical devices (such as wearable sensors, blood glucose monitors, and healthcare apps), Digital Healthcare could benefit from Distributed Cloud Intelligence. When exchanging data between different healthcare institutes, with DCI the regulatory compliance risks are minimized by eliminating raw data transfer. On another hand, for Video analytics, DCI enables on-demand scaling and resilience by offloading the computer vision algorithms to the cloud with the increased bandwidth that 5G networks offer.

To address the many challenges related to edge, Konica Minolta Digital Services R&D is innovating in three key areas:

To find out how these solutions could apply to your industry, get in touch with our researchers today.